Hell of a Coincidence

Each time I think back on this pivotal decision,  more and more I believe that the date was pretty significant. It happened to be the birthday of my mother, who had passed away a little more than a year previously, so I am sure I was feeling rather introspective and reflective. Perhaps I was more open to making a crucial decision that I had been, until that point, only theoretically pondering. On that particular day, a Sunday, I happened to come across some data that ultimately became the straw that broke the camel's back. I'm done with this, I decided, no more. I'm divorcing Jason. I'm very unhappy and homesick, I know he's unhappy, and I have no business staying in this marriage.

(Also, here's a good lesson for all of us to remember: if you are suspicious enough about your partner to go snooping about on your partner's electronic devices, you absolutely should NOT be shocked when you find the shit that confirms your suspicions.)

"It's best to step into the future while it's still waiting for you," says Alice Hoffman in a book that was published  a good few years after all this transpired, but there is truth in this statement even prior to the statement's existence. Not only was I going to divorce Jason, but I was going to do it soon, and then I was going to move home and pursue the life I hadn't yet had a chance to live, back in Indiana.

Making the decision was pretty easy. Acting on it...well, that took longer. It took me two weeks to confront my husband; 10 months to move out of our home, 11 months for me to file for divorce. But I wasted no time in letting my sisters know about this shift in their baby sister's life. And my Eldest Sister decided that, if her youngest sister was moving back to the frozen wastelands of the Midwest, she would be needing a blanket. And so she got to knitting.

While she was knitting away, I was going through a rather arduous and painful time in California. Divorce ain't easy, even when it's more or less amicable. It was an excruciating time of loneliness and anxiety and depression and the not-unspoken fear of what if I can never find work back in Indiana and move home? It was a kind of hell. I was terrified that things would never change.

Of course, things did change: A little more than a year after I decided to leave my California life, I was able to actually do so, and moved home to Indiana.

And still my sister kept knitting.

Okay, not really. But six years did pass. Many things happened, as they are wont to do: The divorce came to pass, my grandmother passed away, I earned a promotion, I learned what it was like to live with a mentally unstable (and mean) individual, I lived through a Trump presidency and a pandemic...and all the while, down in the wilds of Florida, my Eldest was click-click-clicking away with her knitting needles, working at the Divorce Blanket here and there.

And then today, 4 January, 2021--six years to the day that I made my choice--I opened up my front door to see a lumpy, bulky package on my doormat. And mere minutes later,  I was wrapped up in a colourful blanket, a physical manifestation of my sister's loves and hopes for me and a brighter future. 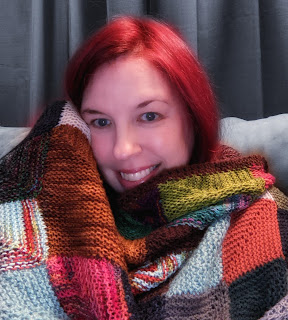 It's a beautiful creation, knitted together with the yarn scraps of a dozen different strangers--folks who answered the call my sister sent out for some of their favorite textiles, along with hopes and well-wishes. It's soft and wraps perfectly around my shoulders, and on these chilly Southern Indiana nights, it's just the thing. And it's a reminder of my sister's belief in me, which never flagged, even when my own hope and faith did.
she
has
been through
hell.
so believe me when
i say,
fear her when she looks
into the fire and smiles.
-e. corona

*Disclaimer: there are many kinds of hell. My hell is not your hell; there are many, many worse hells. The particular hell to which I refer above is probably neither the only hell, nor the worst hell, I will go through in my life, but it's the hell I am choosing to share at this moment.

Email ThisBlogThis!Share to TwitterShare to FacebookShare to Pinterest
Labels: by way of sorrow, divorce, sisters